What lengths would you go to in order to get a boyfriend/girlfriend back?  This is one of the central questions faced by thirty-something Imogene (Kristen Wiig), who was once a promising young New York playwright but whose promise has fizzled, thanks to a crisis of confidence in the comedy Girl Most Likely.

Heavily in denial about being dumped by her society boyfriend, Imogene uses her skill for drama to stage an elaborate fake suicide as an appeal for his sympathy. However when her attempt backfires, she is put into the custody of Zelda, her estranged gambling addict mother (Annette Bening), and must return home with her to the Jersey shore. Desperate to get back to her Manhattan circle of so- called friends, Imogene must finally deal with her family, including her unique crab obsessed brother (Christopher Fitzgerald), Zelda’s new shady CIA boyfriend The Bousche (Matt Dillon) and a cute young lodger and wannabe singer (Darren Criss), who together help Imogene sort out her place in the world.

Directed by Shari Springer Berman and Robert Pulcini (“The Nanny Diaries”), Girl most likely also attempts to explore the mother-and-child relationship and the length that parents go to in order to protect their children. 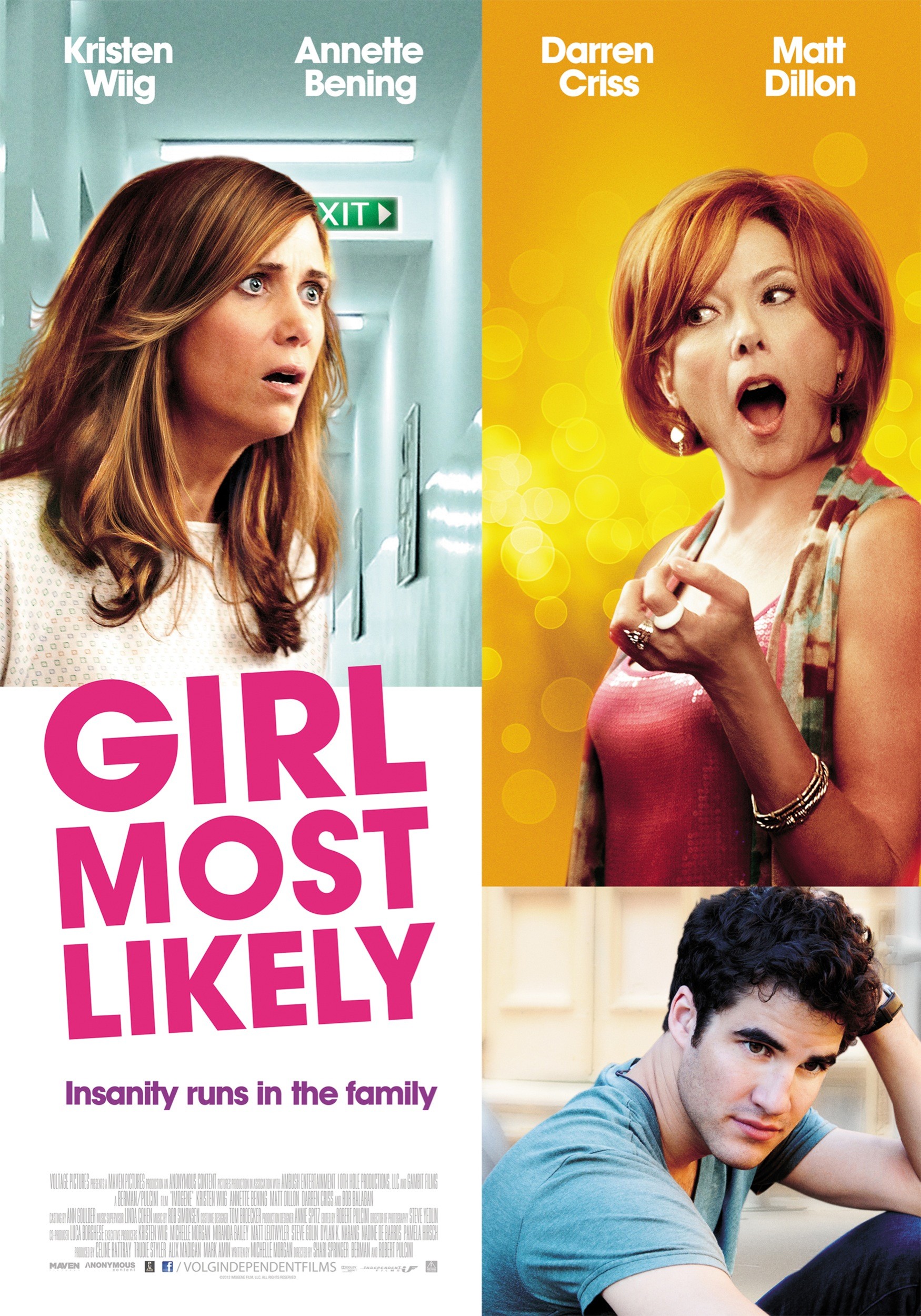 This is a frothy sweet and rather light movie that leaves you wishing it had a little more depth and flavor. Wiig’s demonstration yet again of her impeccable comedic timing and her portrayal of a desperate imploding woman, which is more than adequate, was enjoyable to watch, however it felt like this character was another version of the one she played in her breakout hit from last year Bridesmaids.

The story is a little too implausible and lacked consistency in tone.  The film seems to have trouble deciding whether it wants to be an all out family comedy or tender drama about the trials and tribulations of class, single parenting and ambition.

Even with a great cast in Benning, Dhillon and Fitzgerald, this movie didn’t convince me to join it on it’s journey and so I ended up not quite caring for our main protagonist.  That’s not to say that there aren’t a few really funny and tender moments which make this movie an easy watch.

Overall, despite another great performance from Kristen Wiig, a complicated back-story and a few too many quirky characters made this otherwise potentially interesting character story come across a little over-cooked.

Who hasn’t managed to catch “Black Swan” yet (or the moviewallas review of it)?  No judgments I promise, but, if you have been sitting on the fence about watching this film, maybe the attached video will convince you to either go watch it or preload it into your Netflix queue.

Even though this film didn’t make my 2010 Top Ten list (note it did make both fellow wallas lists),  I did really enjoy this movie. Much of the enjoyment becuase Natalie Portman was mesmerizing to watch as Nina Sayars – the swan herself. The attached video from Fox Searchlight Pictures shows the young ballerina in training and believe me, Portman is totally deserved of that title.

With Aronofsky’s brilliant direction and a great supporting cast and of course the incredible dancing by  both Portman and Mila Kunis, watching this film won’t be a waste of time.  That and i think Portman may be one of the strongest contenders (along with Annette Benning) for the “Best Actress” Oscar next week.

The ultimate “Pretty woman” now has a new title; “Wicked step mother” or “Queen” even.  Relativity Media has closed a deal with Oscar®-winner Julia Roberts to play the Queen in its upcoming untitled Snow White feature, based on the Brothers Grimm story which will be directed by Tarsem Singh (Immortals, The Cell).  The studio stated Pre-production has begun and principal photography will start in April. The theatrical release date is set for June 2012.

Relativity’s Snow White a retelling of one of the most beloved fables of all-time, will eschew the traditional story in favor of a more modern tale full of comedy and adventure. After her evil stepmother kills her father and destroys the kingdom, Snow White bands together with a gang of seven quarrelsome dwarfs to reclaim what is rightly hers. The script was written by Melissa Wallack (Meet Bill) and Jason Keller (Machine Gun Preacher).

Relativity’s CEO Ryan Kavanaugh commented, “Julia was our first and only choice to play the Queen. She is an icon, and we know that she will make this role her own in a way that no one else could.”

I don’t know about you, but I love me a good fairy tale and can’t wait to see who will be Prince Charming

The Oscar nominations are announced tomorrow morning – is anyone as excited as I am?  I am not sure why I am so excited, I mean it’s not like I am waiting to find out if I get nominated or anything but I am really excited.  I can’t even imagine how I would feel if I had a dog in the race?  If I was in any jeopardy of getting a statuette, a gold-plated britannium on a black metal base which is 13.5 in (34 cm) tall, weighs 8.5 lb (3.85 kg) and depicts a knight rendered in Art Deco style holding a crusader’s sword standing on a reel of film with five spokes, would I be even more excited than I am now; a mere watcher of films?

If I was Colin Firth (c’mon I am British!) what would I be thinking tonight?  Would I be nursing my cup of cocoa reassuring myself that it doesn’t matter what happens tomorrow because “I know I did a great job?” or “I don’t need another statue to prove I’m a great actor – I just loved playing a stuttering monarch that no one ever talks about”

What if I was Annette Bening – Surely the fact that I played “same sex marriage” and made it look damn convincing vs. that little whippersnapper who just had to learn to dance is worth a nod?  C’mon guys you’ve looked me over so many times, everyone knows I am a GREAT actress!

And if I’m David Fincher, I mean I have a great body of work behind me already and I made a film about a networking website look like an exciting week in Ibiza – that takes a lot of talent

I am Christian Bale now – marveling at my ability to pull off the great Dicky Eklund.  I had to train just as hard as Natalie Portman and I’ve been around longer, wait, statues make great things to throw at people, no?  By the way, I wonder if Amy Adams or Melissa Leo will be nominated – wouldn’t it be great of we all got one.

Finally, what if I’m Toy Story 3 – I mean I totally deserve best film – just because I am rendered in code and not celluloid, should that be held against me?

Anyone missing Borat yet?  What about Bruno or even Ali G? Well Good news for all you Sacha Baron Cohen fans out there because Paramount Pictures announced today that his new comedy “THE DICTATOR” will be released worldwide on May 11,2012 with Larry Charles director of both “Borat” and “Bruno” directing again

The film tells the heroic story of a dictator who risked his life to ensure that democracy would never come to the country he so lovingly oppressed. It is inspired by the best selling novel “Zabibah and The King” by Saddam Hussein.

Baron Cohen is in impressive company with the production of this film with Scott Rudin, Alec Berg, Jeff Schaffer, and David Mandel joining the project which marks the first collaboration for Rudin (“The Social Network,” “True Grit”) and Baron Cohen, while Berg, Schaffer and Mandel(Seinfeld, Curb Your Enthusiasm) join him as screenwriters on the movie.

So what did you think of last night’s “Globes” telecast? I was mildly entertained at best and much as I was excited to see if moviewallas had got it right throughout the year with respect to what we thought were good performances and films, I feel like most of the day and the day following was/is being taken up not by the show victors themselves but rather by the before and aftermath.

It seems like the effort of the Hollywood Foreign Press Association (HFPA) to recognize excellence in film and television, both domestic and foreign has turned into the rather marginal part of the day vs. a plethora of shows that have sprung up around it, “Live from the red carpet” “Live form the red carpet pre-show” “After show party” and today the day following is even worse; “Fashion Police” “E! News” “ Access Hollywood”, “The Today Show” amongst others. Don’t get me wrong, I am as celebrity obsessed as the next guy but really, do we need this much coverage? Good job it’s MLK day today and I get to sit on the couch all day with the remote controlled taped to my hand but how many more times can I watch Ricky Gervais give another cringe worthy introduction or Angelina Jolie reapply her lip gloss whilst draping herself over Mr. Pitt? Of course I could get up and switch the TV off but I find myself paralyzed and mesmerized by images of women in beautiful gowns and handsome actors in well-pressed tuxedos and I feel like the world will end if I can’t figure out where to buy the knock off version of the Marchesa gown worn by Amy Adams already available online – I mean have knock off factories on the other side of the world been working all through the night?

Well, on to the actual show now (given I have just learned that the proximity of your breasts in your cleavage can make you look older or younger – thanks “Access Hollywood”). For the most part, the show was adequate apart from Ricky Gervais (and I usually LOVE Ricky and sarcasm); why do we even need a host HFPA – although I have a strong feeling that there will be no host next year especially not Mr. Gervais. I was so pleased to see that some moviewalla faves were honored (unanimous loves for the gang were “The Kids are All Right”, “The Social Network” “The King’s Speech”, “Toy Story 3”, Natalie Portman in “The Black Swan” and my own fave “The Fighter” (sorry Joe no love for “Inception”) and no love for “True Grit”, “127 Hours” or even “Fair Game” which didn’t even get a fair nomination! Loved that the Cecile B Deville award went to Bobby DeNiro and loved Matt Damon’s intro speech (maybe he could host next year?) however, I was surprised that there weren’t more musical acts in between the awards.  For a full list of winners and nominees, go to www.goldenglobes.org/nominations/

So award season is truly underway and if you’re like me and can’t wait for the next set of who’s going to wear what, the complete timetable is below.

Finally, you may be asking about the correlation between the Globes and the Oscars; not much actually given none of the 88 voting members of the HFPA overlap with the nearly 6,000 Academy members who vote for the Oscars. In addition, the deadline for the first round of Academy Award voting was Jan. 14, so whatever transpires at the Globes can’t really sway how the Academy votes for it’s nominees, who are due to be announced on Jan. 25 – well that’s the theory anyway. However, when it comes to the winners, that’s another story since many nominees often get nods for both awards and given the Globes have such high visibility, it’s hard for Oscar voters not to be influenced by the Globes’ outcome when choosing their prizewinners weeks later.